Snow Even Above Zero Celsius Degrees? Now, It is Possible
The NeveXN gamble persuades Leitner and lands in New Zealand 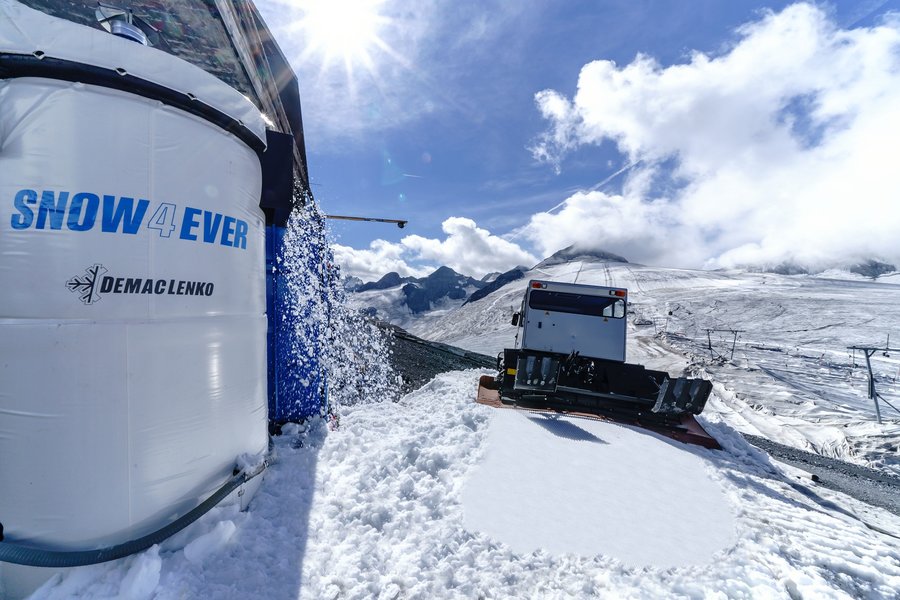 Fresh and compact artificial snow even if the thermometer marks 10 Celsius degrees? It is not the utopia of winter sports lovers, but of the invention of the startup NeveXN that in Rovereto, at the Mechatronics Hub, has developed a machine capable of producing quality snow even at above-zero, or between 0 and 15 Celsius degree temperatures, all within an eco-friendly frame, since the ingenious system that uses thermal energy (yes, just heat!) to produce snowflakes can be powered by renewable sources, such as woodworking waste or solar energy.

It all started with that trip to California

“The idea - explains founder Francesco Besana, 38, a Bergamo-native mechanical engineer, but of Trento by adoption - came to my mind while I was completing my Ph.D. in Energy and Environment Technologies in Bolzano. I often had to carry out water cooling experiments using heat sources and one day, while I was in California on a study trip, I thought I could push my limit, which up to then had been 6°C, a little further, producing snow instead of cold water”.

Regardless of the time zone, Besana immediately phoned those who in 2012 would become the co-founding partners of NeveXN, namely Fabiano Maturi, an engineer, who cut his teeth working for the Pinzolo Cableway company, and Anna Vanzo, Economist, author of a dissertation on the economic impact of Marcialonga, the famous cross-country skiing race in Valle di Fiemme.

The “secret” lies in the evaporator

But how does the machine designed by NeveXN work? Nowadays, snow cannons are nothing more than powerful nebulizers that inject into the atmosphere tiny droplets of water that upon falling crystallize into flakes that become gradually larger as they approach the ground. The colder the air temperature is, the more successful the process becomes, but if outside temperatures exceed zero Celsius degrees, artificial snow melts away, and if no natural snow falls the slopes stay closed and no tourists animate the Trentino valleys.

To solve the problem, NeveXN has patented a machine equipped with an “evaporator” tank, which recreates the conditions for growing snow crystals, so as to release them to the atmosphere only when they are fully formed. The machine works with thermal energy and can be powered by renewable energy harvested by solar panels and biomass boilers, with a significant reduction in the water and electricity consumption that is typical of traditional snowmaking systems.

While this is the main aim of the evaporator, this device can still find useful applications in the food, medical and building sectors, for example, to purify and desalinate water without using chemical additives or to create new cooling liquids.

From the D2T Award to a partnership with the Leitner “giant”

The NeveXN concept, which ranked second in 2011 at the D2T Start Cup, the Trentino Sviluppo competition that rewards the best business ideas of young people, became a prototype tested in 2014 in the beautiful setting of the cross-country skiing Olympic stadium at Lago di Tesero, in Val di Fiemme.

In 2016, after a couple of years spent perfecting the idea and looking for possible investors, the startup won the trust of the South Tyrolean Leitner Group - world leader in cableway transport, with 726 million turnover and over 3,000 employees - which, through its own company Demaclenko purchased a NeveXN shareholding, and, above all, laid on the table a 2 million Euro investment for the industrialization, production and marketing of three different models of the “Snow4Ever” machine, with a capacity of 1, 4 and 8 cubic meters of snow per hour.

A success for the Trentino start-up support system

Established in 2012 by three founding partners - Francesco Besana, Fabiano Maturi and Anna Vanzo - and awarded second place at the D2T Start Cup Award, NeveXN received in 2013 a 150,000 Euro grant from “Seed Money”, a project co-financed by the European Union with ERDF funds and reserved to the most innovative business ventures.

In 2015, the Executive Agency for Small and Medium-sized Enterprises of the European Union (EASME) awarded NeveXN a 50,000 Euro grant which, in 2016, was followed by the “Seal of Excellence” European certification, attesting to the excellent potential of the above-zero temperature snowmaking system. And in 2016, a few days after the signing of the agreement with Leitner-Demaclenko, another good news: the award of 1.5 million Euro under the EU-funded Horizon 2020 program.

From Austria to New Zealand, it is Snow4Ever-fever!

The record heat waves of summer 2018 did not slow down the eight engineers, as well as technicians and administrative personnel of NeveXN, who remain steadfastly committed to fulfilling orders for different latitudes: from New Zealand to Carinthia, passing through the ski area of ​​Manzaneda, in Spain and the Stelvio Pass, in Italy. Right here, at the end of July, a Snow4Ever device was installed on the slopes of the SIFAS (Società Impianti Funiviari Allo Stelvio, the Stelvio Pass cableway system company) at almost 3,000 meters a.s.l. The system can be easily monitored remotely via a simple app, and can be fully integrated with the pre-existing snowmaking systems. The goal of the machine - which shoots 300 cubic meters of snow per week - is to cover the stretch of land (snowless, up to now) that connects the ski lift to the cableway. In this way, champions of the caliber of Sofia Goggia, Peter Fill and Christof Innerhofer, but also amateurs and tourists, will be able to ski down the slope in a breeze, without ever taking off their skis.