In the Former “Cold Factory”, a Future Made of Glass is Forged
In Trento, in the industrial facility vacated by Whirlpool, Vetri Speciali is thriving 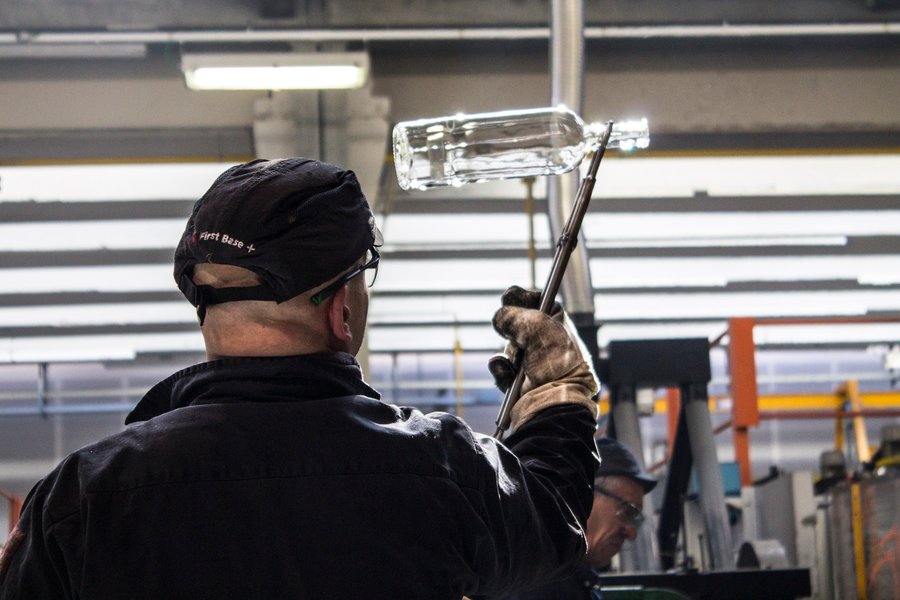 It is one of those moments that remain engraved in memory. The furnace of the new factory was turned on on Wednesday, October 12, 2016, and will never be turned off. The incandescent heart of Vetri Speciali - the “Ferrari of glass” as someone has defined this flagship of Italian manufacturing - operates at a temperature of 1,600°C, “churning out” 350 thousand bottles a day. Glass must cook for 30-32 hours before giving life to a bottle. The first bottle came out of the new plant in the Northern End of Trento on October 25, 2016 and called for a day of celebration for all: workers, managers, ownership, but also the City, the Province, the Employment Agency and Trentino Sviluppo.

The black summer of the “Cold Factory”

It was July 2013, when the multinational electric appliance company Whirpool announced its intention to dispose of its production plant in Trento. In less than a year, 454 employees were laid off.

In February 2014, when the headquarters in Spini di Gardolo closed their doors, the Autonomous Province of Trento, the social partners and the European institutions came together to develop a shared program that would return to this region a stable and long-term manufacturing project. Thus began a new phase in the management of public assets and an innovative industrial relations model based on the wholesome partnership among all stakeholders of the system: private enterprise, workers, trade unions and public bodies:

For the first time, through a Memorandum of Understanding signed by the Province of Trento and Whirpool Europe, the closing company made available resources (about 3 million Euro) for de-industrialization and employee re-training and re-hiring.

In April 2015, Trentino Sviluppo put out a call for the reindustrialization of the “former Whirpool” complex of Trento, with a surface area of 140 thousand square meters, of which 72,000 built. Trentino Sviluppo’s goal was to grant the spaces in usufruct, though binding the awardee company to invest in the maintenance and renovation of the buildings.

In June 2015, Vetri Speciali responded to the call. Through a sophisticated system of melting furnaces, the company produces and exports glass containers for high-quality food all over the world. The company, with administrative headquarters in Trento, is strongly rooted in the Italian North-East area, with three plants in Pergine (Trento), Ormelle (Treviso) and San Vito in Tagliamento (Pordenone).

Investments for 44 million: the change of a destiny that seemed already written

In the summer of 2015, with the support of public funds amounting to 442 thousand Euro, Vetri Speciali committed to investing in the former Whirpool complex as much as 44 million Euro, of which 9 for the renovation of work spaces and about 28 for machinery.

After the signing of the Memorandum of Understanding with Trentino Sviluppo, the Autonomous Province of Trento, the Municipality of Trento and the trade unions, work began with the objective of starting production at the beginning of 2017.

In November 2015, after following the retraining programme of the Employment Agency, financed with European funds, 18 former Whirpool workers were hired by Vetri Speciali to carry out quality checks.

Factory work returns ... and with it, spin-off benefits

In January 2016, construction works of the melting furnace began, and in May 2016 staff was hired (including 120 former Whirpool workers), to fill a total of 190 positions, poised to become 250 by 2021. In addition, 8 recruitment programs were organized by the company for 143 former Whirpool workers to be employed at the San Vito, Ormelle and Pergine facilities, who received 10,000, 5,000 or 3,000 Euro hiring bonuses, depending on the production phase and location. Of the 43 million Euro invested by Vetri Speciali in the Spini di Gardolo facility, 15 million went to 72 companies in Trentino.

The “Trento case”: a model for Italy and Europe

On 25 October, 2016, the first test bottle was extracted from the melting furnace in the presence of Vetri Speciali S.p.a. Chairman Vitaliano Torno, Managing Director Giorgio Mazzer, the team of managers, technicians and workers, representatives of trade unions, Trentino Sviluppo, Labor Agency and Assindustria, the mayor of Trento Alessandro Andreatta and the Vice-President of the Province of Trento Alessandro Olivi. It was the first product of a long series that was estimated to generate a yearly turnover of 90 million Euro, making Vetri Speciali a true model of reconversion of decommissioned production facilities, to be imitated in Italy and in Europe.

As of 31 December, 2017, Vetri Speciali’s accounts balanced out: the Group invoiced a total of 150 million Euro and gave work to 748 employees, of which 357 in Trentino and 209 in the production site of Spini di Gardolo, in Trento’s Northern End; of these, 108 are adequately prepared and re-trained former Whirlpool employees.

To build a new production facility