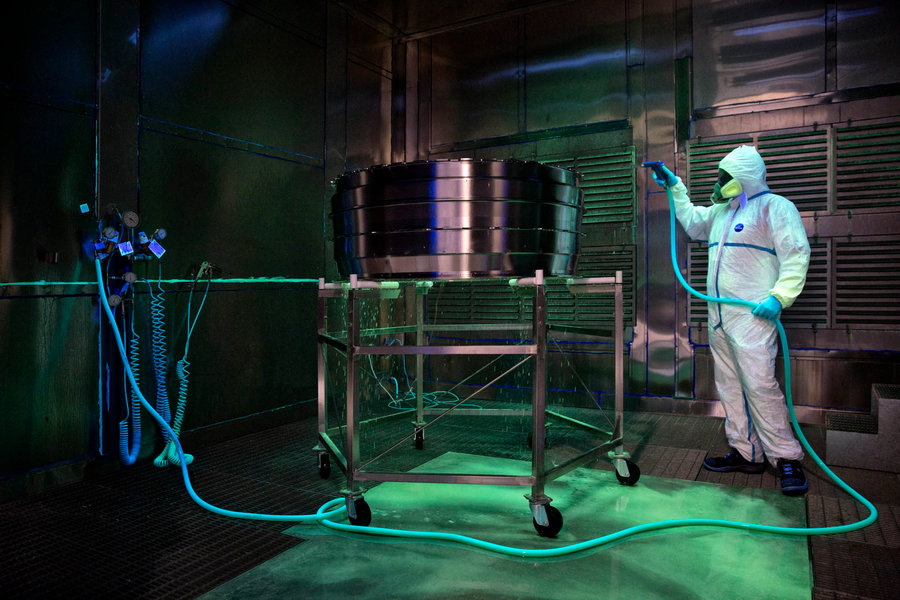 It happens rarely, but sometimes it happens indeed: David beats Goliath. It is the tale of Leicester, the football team coached by Claudio Ranieri, which became Champion of England on 2 May, 2016, for the first time in a 132-year history, stunning bookmakers who placed the odds at 5,000 to 1.

But it is also the story of Fly, an industrial reality founded in 2008 in Grigno, on the easternmost corner of Valsugana, a few kilometers from the Veneto region, from a joint challenge taken up by the Forgital Group and the Autonomous Province of Trento. It was 12.30 pm on Tuesday, 21 June, 2011, at the 49th edition of the Parigi-Le Bourget International Aviation and Aerospace Exhibition, when Richard Harcourt, Rolls Royce Vice-President, signed with Fly a twenty-year $ 1.6 billion contract for the production of parts of the turbojet engine to be mounted on the new Airbus A350. More specifically, it was the titanium alloy “fan case” module, 3.2 meters in diameter, for an engine that, as pure luck would have it, is called “Trent XWB”.

In the end, the small Trentino-Veneto company made it, beating 34 international competitors, including a Chinese giant supported by the Beijing government and an aerospace American company with 8,000 employees. Fly took off on that day.

From Rolls Royce engines to the Ariane 5 rocket

Five years later, starting in January 2016, Fly took home another achievement to be hanged on the wall. At the Grigno plant, the company would finish some of the most important pieces of the European space carrier Ariane 5 for the ArianeSpace consortium.

However, new spaces were needed to this end, and in April 2016 the Autonomous Province of Trento, Trentino Sviluppo and Fly signed a new agreement, eight years after the first agreement by which Trentino Sviluppo had joined the corporate structure of the new company founded in Grigno Valsugana by Forgital, a group headquartered in Velo d'Astico (Vicenza), boasting a turnover of more than 300 million Euro and over 1,000 employees worldwide.

The agreement entailed the purchase by Trentino Sviluppo, at a price of 7.5 million Euro, of a property to be leased to Fly. By increasing production potential and turnover, the company is now on its way to doubling its employment, going from 100 to 200 employees by 2020, and giving life, in Lower Valsugana, to a mechanical and mechatronic sector applied to aerospace with a series of production activities supporting a number of small and medium local companies and promoting local training and research centers alongside the University of Trento.

At a marathoner’s pace

Those who work in the aerospace sector know this much: nothing is taken for granted, and the sprinting and ephemeral rush of sprinters is of little use without the endurance and tenacity of a marathon runner.

Since 2008, Fly has not grown by leaps and bounds, but in an exponential manner, going from the first historical 18 employees to over 100 employees in 2015 and tripling its work space from the 6,000 square meters of the first facility to the current 17,500 square meters, to which a recent agreement will now add a new extension for an additional 6,600 square meters.

“When we chose to embrace this challenge - said Nadir Spezzapria, Fly Chairman - there were only meadows in Grigno. The evolution recorded from 2008 to today is the result of the great work done in the region in these years, during which we appreciated the great cultural affinity that binds us to Trentino and to Valsugana in particular”.

Between 2016 and the first half of 2018, Fly invested € 27 million in the Grigno plant - in addition to the € 75 million spent previously - for the expansion of the production unit and the purchase of new machinery and production facilities, as well as to strengthen its research and development activities, with a positive impact in Valsugana and Trentino in general, which, in the last decade, is estimated at over 58 million Euro.

Employment levels also increased, from around 100 employees at the end of 2015 to 192 in June 2018. In particular, the company is looking for technicians, specialized welders, high-precision mechanical processing, assembly and quality control personnel, whose selection will involve the company in the development of a special project with the support of the Labor Agency of the Province of Trento and through the network of local employment service agencies, promoting the recruitment of young people from redundancy schemes as well as workers from Valsugana and, broadly, the entire provincial area.

Equally important are the benefits resulting from the strengthening of partnerships for the Mechatronics Hub, by which Fly and Trentino Sviluppo will share a series of promotional strategies to attract businesses and strengthen training initiatives for personnel specializing in the mechanics and mechatronics sector, with the involvement of the higher vocational training institutes, the University of Trento and the research agencies in Trentino.

And the story continues. Because, after all, there will always be some David ready to challenge Goliath.